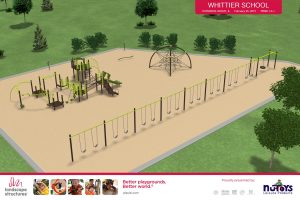 Estimated cost for removal of old equipment, purchase of new equipment and installation:  $100,000

Interested in helping with funding initiatives for 2015-2016 school year?

The spring Fundraiser was a great success!  Thank you to all who bid, and signed up for experiences and purchased tickets!  This year we raised over $21,000 to put toward the playground fund!

Thank you for supporting the Whittier Playground Project by becoming a sponsor!

It has been a busy year for fundraising!  In the fall we held a read-a-thon which raised money for the playground and put books in the hands of the children who raised pledges and in the hands of Whittier teachers!

In February Whittier students participated in the Penny Wars and raised over $4000!

At the March PTA meeting a motion to move $25,000 from the PTA reserves to the Playground Fund was approved.

Combine the above with corporate and community donations and the we have raised ~$63,000 for the playground!

Be sure to join us on April 8th for the spring fundraiser to help reach our goal!

Thank you for supporting the Whittier Playground Project by becoming a sponsor!

This has been a busy summer! The playground committee was out hitting the pavement informing the community about the playground project.  Informational door hangers were distributed and families sold World’s Finest Chocolate at community events like Rotary Fest, Friday Night Car Show and Saturday Morning Farmer’s Market.

The online donation page was also launched this summer!

The 2015 – 2016 school year looks positive for fundraising efforts, so keep an eye out for opportunities to help reach the community and corporations to raise funds!

Wow, can you believe it’s been a year since the Whittier PTA decided to move forward with the Primary Playground Initiative!

We definitely have some forward momentum here, and it’s so exciting!  Keep an eye out for information about how you can help with the community/corporate fundraising this summer!

SAVERS Donation Fundraising Program being developed for May 2015

Revised Community & Corporate Sponsorship letters have been given to the Exec. Board and awaiting approval.  Once approved Community and Corporate direct sponsorship can begin.

Seeking partnership of District 58 to assist with mulch.